Bitcoin even goes beyond Tesla's market cap for a short time as bulls suggest the upwards momentum is not done even at $40,000. Bitcoin (BTC) returned

Bitcoin even goes beyond Tesla's market cap for a short time as bulls suggest the upwards momentum is not done even at $40,000.

After a 9% fall following runs to all-time highs the day before, Bitcoin managed to stay lower only for a matter of hours before bullish momentum returned. Thereafter, the largest cryptocurrency not only matched its all-time highs, but delivered a new one — $40,087. 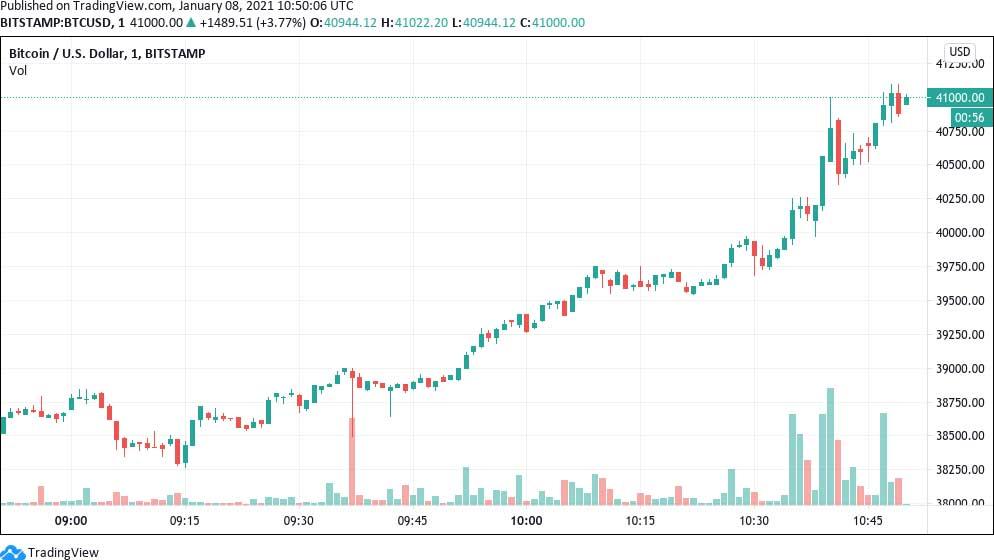 "Seems we only dump to shake out the weak hands these days," a popular social media trader summarized on the day.

Bitcoin also beat the market cap of Chinese giant Tencent and briefly passed "darling" tech firm Tesla as it rose to $41,000 per coin.

As BTC/USD crossed the $40,000 mark, Bitcoin's market cap grew to unprecedented levels, topping out at $745 billion. A day later, following a correction, the figure retreated to $737 billion before regaining its earlier record.

At the same time, Tesla delivered a swift 7.3% daily gain, allowing it to outpace Bitcoin once again after losing its market cap prowess to the cryptocurrency for a short period. On Friday, the company was on $773 billion as Bitcoin once again sailed through $40,000.

A more decisive victory came over Chinese tech giant Tencent, however, which at $716 billion firmly bowed to Bitcoin's momentum. Previously, Tencent was also worth more than Tesla.

As Cointelegraph reported, Tesla had likewise outperformed against stocks and cryptocurrency in 2020, beating even Bitcoin's performance versus its March lows. A look at Tencent stock growth meanwhile underscores the slow pace of gains which characterized other stocks compared to cryptocurrency.

"There are still companies in the world that are worth more than #Bitcoin. Crazy," Tyler Winklevoss, co-founder of Gemini exchange, commented on the phenomenon.

Ethereum looks underpriced while technicals suggest that a breakout is underway

A parabolic advance may be brewing for Ethereum as fundamental factors...

Since November 4, Tezos has been on an upswing as it managed to rise f...

Uniswap Price Forecast: UNI composed for a 16% upswing to $3.2

Uniswap has started to nurture an uptrend after buyers barricaded the ...

Bulls are finally making a comeback into the market and regaining full...

A privacy-focused cryptocurrency Zcash is less than a month away from ...